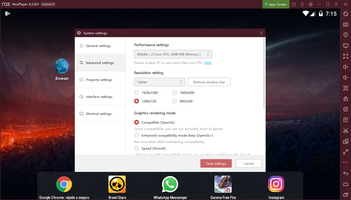 Advertisement
Nox App Player is an Android emulator that lets you use almost any of this operating system's apps from the comfort of your own computer. We're talking about apps along the lines of Clash of Clans, Instagram, Subway Surfers, and Kitchen Stories.

Nox App Player's operating system is based on Android 4.4.2, which lets you use practically any app within Android's extensive catalog. Additionally, this version is possibly one of the most popular and widely used programs out there today, so tons of users are already familiar with it.

Another unique feature Nox App Player provides is control customization. When launching any app, you can create custom controls in a very simple and intuitive way. In less than a minute, configure your keyboard to adapt its buttons for any Android game. You'll even find options that are specially designed for shoot 'em ups.

Plus, thanks to a recent collab partnership between NOX and Uptodown, the official Uptodown Market App comes pre-installed on NOX. Download and run any app from our whole catalog of apps and get automatic updates for any of your downloads directly from our new virtual machine.

Nox App Player is a powerful Android emulator for Windows. Now your Windows PC can run any of the hundreds of apps originally created just for Android -- the most widely used smartphone operating system in the world.
By Andrés López
The popular virtualization tool NOX joins forces with Uptodown

Running Android apps on your PC has never been easier thanks to the huge number of virtualization tools (VTs) available. NoxPlayer is one of the most popular VTs, given its wide range of compatible devices and the possibility to simulate tons of different versions of Google's Android operating system. But, there's even better news: from now on our official Uptodown Market app comes pre-installed on Nox so you can play any of the games from our catalog on your Windows computer.
See more

How to virtualize an Android device from a smartphone

Virtualization is the perfect solution for testing out software in a controlled environment. Although when playing around with Android apps, it's typical to use a desktop emulator, you also have another option that's closer to the real experience, accessing it directly on a smartphone. Here we explain two different ways to do this: using a local computer and streaming the signal, or receiving the signal from a remote virtual machine installed in the cloud.
See more

How to play Lineage 2 Revolution for Android on PC

The release of Lineage 2 Revolution on an international level was an event that fans of Asian MMORPGs had been waiting for, being able to finally play one of the most complete (and challenging) games of the genre adapted for touchscreen devices. However, due to the number of hours that users tend to spend playing games of the genre, and the heavy battery usage of the app, it could be a good idea to play it on a PC using an emulator like Nox. Here, we'll guide you through the process of doing so, step by step.
See more

i seen your vidios are best sir

can nox player effect our pc or can cause virus attack?